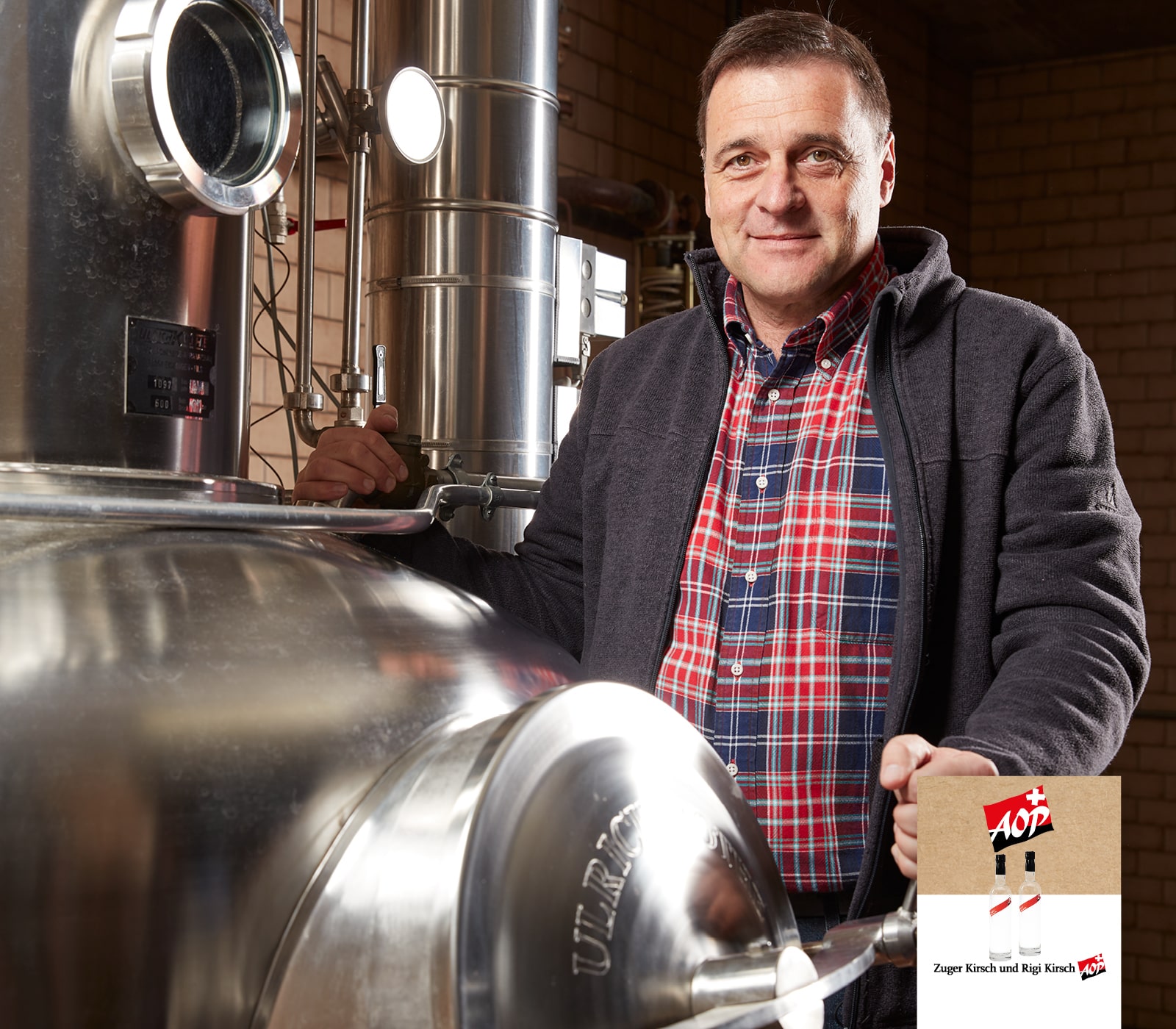 Finest all-natural fruit distillates from cherries with a minimum alcohol content of 40 % vol.p>

The Zuger Kirsch AOP/PDO and the Rigi Kirsch AOP/PDO have been successfully produced and exported worldwide in the region Zug-Rigi for at least 150 years, unmixed or as an assemblage of old cherry varieties used for distilling kirsch. In the Zug-Rigi region a large variety of cherry varieties have always been cultivated, which has generated the richness which characterises the Zuger Kirsch and the Rigi Kirsch, with flavour nuances as „sweet“, „nuttiness“, „marzipan“ or „spice“. Zuger Kirsch and Rigi Kirsch distinguish themselves by a typical almond note, which comes from the use of the typical regional small fruit varieties with the high pit content connected with the raw material.

In the Zug-Rigi region the documentary sources show a cherry culture tradition which is 600 years old. The „Chriesimärt“ is mentioned for the first time in 1627, the tradition of the „Crhiesigloggä“ can be traced back to 1711, the „Chriesisturm“ in a re-narration of 1886. The oldest cherry recipies passed on come from the second half of the 18th century. From the middle of the 19th century the Kirschwasser (cherry brandy) from the Zug-Rigi region became an important export article; industrial distilleries such as Fassbind in Arth SZ (1846), Dettling in Brunnen SZ (1867), Etter in Zug (1879) and Räber in Küssnacht a. R. SZ (1877) came into existence. In 1870 a few cherry farmers and distillators founded the „Kirschwasser-Gesellschaft in Zug“ (cherry brandy company) in the aim of improving the quality and the export of Zuger Kirsch. In 1915 the Zuger Kirschtorte was invented. Since 2007 a downright reversion to the „Chriesi“ (cherry) has taken place in the Zug-Rigi region, in the cantons of Zug, Schwyz and Luzern. In 2009 the association ZUGER & RIGI CHRIESI was initiated, in 2010 the ZUGER KIRSCHTORTEN GESELLSCHAFT (Kirsch cake corporation of Zug). In 2011 the „zuger-rigi-chriesi AG“ was created in the aim of implementing the regional development project „zuger-rigi-chriesi“. All these aggregations have set the objective to promote the „Chriesi“ in all its manifestations, make it an emblem of an entire region and to keep the 600 year old Kirsch culture alive in the Heart of Switzerland.