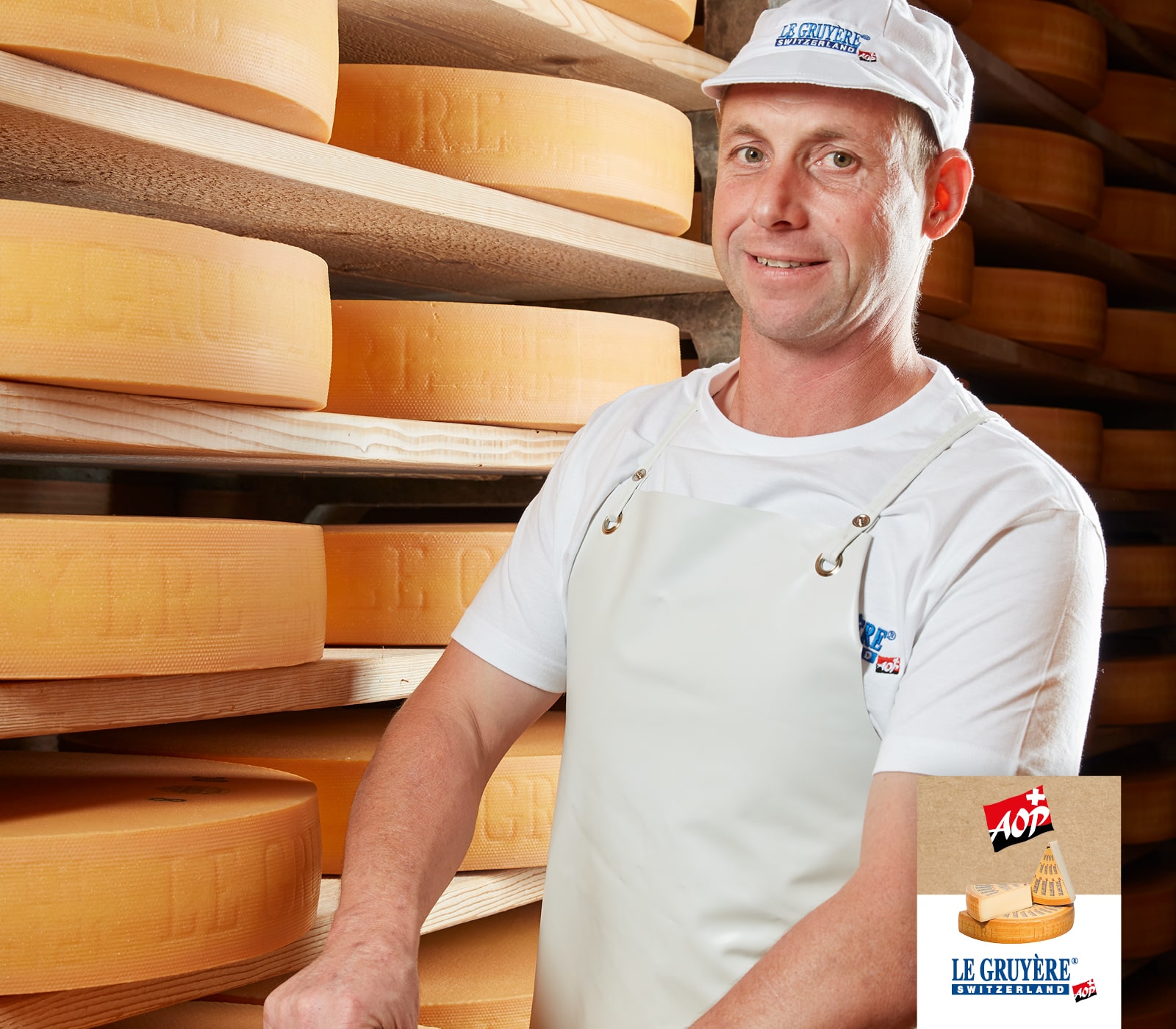 The geographical region includes the cantons of Freiburg, Waadt, Neuenburg and Jura, as well as the districts of Courtelary, La Neuveville, Moutier and the Bernese municipalities of Ferenbalm, Guggisberg, Mühleberg, Münchenwiler, Rüschegg and Wahlern, as well as other cheese dairies in the German-speaking part of Switzerland.

The Gruyere PDO owes its delicacy and characteristic taste to the first class raw milk from cows who are feed on fresh grass in the summer and hay in the winter. Added to that are the Know-how passed on from one generation to the next and the experience of the master cheese-makers and the affineurs. For the manufacture of a loaf of Gruyere PDO weighing about 35 kg it takes not less than 400 litres of fresh milk which is delivered twice a day. Each cheese is systematically labelled with the number of the loaf and the one of the cheese dairy. Manufacture date is always marked on the loaf. The black markings (also called cheese passport) are fixed by means of the cheese protein casein. Here neighter foreign nor artificial substances are used. The Gruyere PDO label and the number of the manufacturing dairy are marked on the surface of the loaf. This way the authenticity of a Gruyere PDO can be guaranteed and misuse prevented. The indications are marked in a relief-like manner in the surface of the loaf by means of a branding iron. This marking gives the Gruyere PDO its identity and ensures its origin can be traced back at any time. During the slow maturing period in the refining cellars, which lasts several months, the loaves are regularly turned and washed with a mix of salt and water. Maturing lasts between 5 and 18 months. Humidity allows the formation of a cheese crust, also known as „Schmiere“ („grease“); it protects the interior of the loaf, thus giving the Gruyere PDO its racy aroma. It is no coincidence that this authentic gift from Nature is appreciated by cheese connoisseurs all over the world.

Already in 1655 the cheese today known to us as Gruyere PDO was named after the district of the canton of Freiburg with the same name, gruière. According to a source, cheese is said to have been marketed in Freiburg from 1249 on. In 1762, the Académie française includes the word ‚Gruyère' in its dictionary, together with the note that it concerns a cheese produced in the Gruyere region. Since the 19th century, efforts have been made to protect the Gruyere, as it was so frequently imitated due to its excellent reputation. It was not until 2001, however, that it finally obtained an efficient protection against imitations thanks to the PDO. Comment The Gruyere PDO is available in the retail trade everywhere. Five months' maturing time is ncessary for a mild, a little over eight months for a medium ripe, approximately ten months for a recent and at least twelve months for a Gruyere surchoix PDO.